The Soul of the Dark Knight 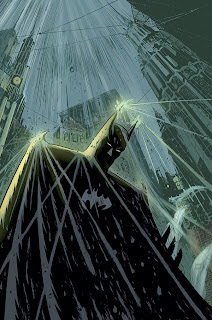 The next Batman movie swoops into theatres soon. I enjoyed director Christopher Nolan’s (Memento) previous take on the character, Batman Begins (2005), and I’m looking forward to his next installment, The Dark Knight (brave of him, I think, not to use the name “Batman” in the title).

So, to celebrate the crime-fighter’s return to the cinema screens, I thought that I’d recall how catastrophically wrong Warner Bros.’ (mis)handling of the character had been in its three sequels between their first installment, Tim Burton’s Batman (1989), and Batman Begins: Batman Returns (1992), Batman Forever (1995), and Batman & Robin (1997). After seeing the last title, I was so soured by the experience that I wrote Warner Bros. Pictures then-chairmen, Robert Daly and Terry Semel, a letter in July 1997 detailing my dissatisfaction:

Back in 1989, Warner Bros. brilliantly brought the classic comic-book character to the screen. Many factors can claim credit for Batman’s phenomenal success: an audience familiar with the property, the eye-catching costumes, the baroque art direction, the pulse-pounding musical score, the delirious cinematography. But these elements finish second, at best, to a more crucial component: a well-told story about believable people.

What made the first Batman movie soar was its attention to the psychology of its characters. The film eased up on the action long enough to let us understand that Batman’s thirst for justice grew out of a deep emotional trauma. The story also carefully laid the groundwork for the Joker’s insanity, allowing us to understand that his own extreme behavior grew out of an equally extreme emotional shock.

And the story built upon the psychological intensity of these two adversaries. As tightly crafted as the narrative was, it never forgot that the audience’s investment in the action and spectacle was utterly dependent on how well they could understand and relate to the humanity of the characters.

In short, the inaugural Batman film gave us a gripping story about human beings, not flat cardboard cut-outs.

Unfortunately, each successive entry in the Batman series increasingly neglected people for pageantry, psychology for special effects. Now, your latest offering, Batman & Robin, has strayed so far from the excellence of the original as to be almost unrecognizable as a sequel.

Rather than taking the time to establish the characters so that the audience can understand their emotional underpinnings, Batman & Robin’s characters are introduced in the blink of an eye. For instance, the woman who becomes Poison Ivy (Uma Thurman) is first seen awkwardly announcing her backstory into a tape recorder. Instead of showing the audience what brought Poison Ivy to this turn of events — thereby letting us feel for her — the film clumsily tells us what’s going on. Her transformation into the costumed villainess is so sudden and convoluted that it comes off as a silly contrivance. And her villainous actions are conveniently blamed on her environmental extremism.

Although the film tries to build an emotional center around the Bruce Wayne-Alfred relationship, their affinity is only hinted at through fleeting and intrusive flashbacks. In other words, cinematic shorthand in Batman & Robin takes the place of the emotional development in your first movie.

But solid characterization appears to be a luxury that Batman & Robin can’t afford. The movie is so busy cramming its story full of familiar comic-book figures (Poison Ivy, Mr. Freeze, Batgirl) that it doesn’t have time to plumb their psychological depths and let us understand them. Their uncommon origins and motives must be conveyed as hastily and superficially as possible. The filmmakers’ attitude seems to be that the audience already knows who these characters are, so there’s no point in fleshing them out.

I’m sure that some of the creators behind Batman & Robin will point to the success of the campy 1960s Batman TV show to justify their cartoonish take on the material. But the mocking tone of the TV series proved to be a dead end, and the show died after three short seasons.

The studio’s approach to the film series appears to be ignoring an important fact: Batman gained his current following after the satirical TV show ended. In a successful effort to revamp the hero’s image, DC Comics brought Batman “back to basics” in the early 1970s. Robin was sent away to college, and Batman — now a lone, shadowy figure — regained his hard edge. Reminding the readers of Batman’s scarred psychology, the comics stopped portraying the costumed hero as a knee-jerk do-gooder (as the TV series had) and started portraying him as a vulnerable human being who obsessively fights crime in order to rechannel the impossibility of avenging his murdered parents.

In fact, Batman became so obsessive that his actions in the comics sometimes bordered on the blood-thirsty. Though he never completely crossed the line into criminality, Batman regained his status as a menacing presence, pushing the envelope of justice. After all, Bruce Wayne adopted the identity of Batman in order to strike terror into the hearts of criminals. The bat is not a comforting creature: it’s an animal often associated with darkness and fright. And Batman’s image plays on these fearful associations. The popular appeal of Batman’s serious, shadowy, and all-too-human image was confirmed in 1986 by the runaway success of Frank Miller’s graphic novel Batman: The Dark Knight Returns.

The first Batman movie in 1989 skillfully employed this dark image, and this is why the nocturnal look of the sets and costumes is so appropriate. But the sequels have increasingly shied away from the dark side in favor of flashy special effects and snide humor.

My own disaffection for the direction of the Batman films appears to be mirrored by other movie-goers. The latest box-office reports say that Batman & Robin’s grosses have plummeted precipitously. Now, a once sure-fire summer “hit” looks like it will have trouble recouping its $100-million+ production costs. I’m sure that many will blame this phenomenon on Men in Black competing for the same audience.

Meanwhile, another action film, Paramount’s Face/Off, one more movie arguably competing for Men in Black’s viewers, is holding its own at the box office. Like the first Batman movie, Face/Off is a character-driven adventure that probes the dark side of justice, the ambiguity of good and evil. If you took away the gunfights and the explosions in Face/Off, you could still have a satisfying psychological drama. Because of this, I predict that Face/Off will continue to perform well for the rest of the season, while Batman & Robin rapidly declines.

As an aficionado of Batman for the last 30 years, I urge Warner Bros. to return to the humanity and integrity of your 1989 film. And as a script consultant working in Hollywood, I can offer a few modest suggestions about how to do this:

1. Limit each movie to one major villain apiece. The series’ biggest problem is that there are too many characters whose unusual origins must be explained. As a result, story time that could be used to explore the characters is, instead, taken up by introducing one villain after another. Crowding each movie with a plethora of villains and supporting characters played by big-name stars might make for a good-looking marquee, but it intrudes on valuable story time.

2. Take the time to develop the characters. The audience’s investment in a movie vitally hinges on their ability to understand and relate to the characters. By devoting more screen time to showing — not telling — what motivates these fictional figures (and less on crowded casting and special effects), the Batman movies can create a more emotionally rewarding experience. This is what will draw the repeat viewers. (I saw the first Batman three times!)

3. Use realistic action scenes to extend the characterization. I don’t like gratuitous violence, but I can respect action scenes when they grow organically out of the story and psychology. The less the characters are developed, the less the viewer understands what brings Batman and the bad guys to blows. Batman & Robin in particular stresses unrealistic, gravity-defying fight choreography over narrative credibility. Consequently, the violent set-pieces seem farcical and obligatory. If the Batman series can return to grounding the violence in a realistic, character-driven context, the action can advance and enhance the story line.

4. Never forget that Batman has a dark side. A well-adjusted person does not put on a bat-suit and fight crime. Batman battles crime in order to battle his own internal demons. As long as the audience understands Batman’s haunted past, the movies can hone a compelling human edge. The first film did a marvelous job of conveying Batman’s unbalanced psyche, but Batman & Robin portrays the title characters as fighting crime simply because it’s “what they do.” As a result, the humanity is missing, and the movie plays like a two-dimensional parody of a comic-book, much as the 1960s TV series did.

I would like to assure you, gentlemen, that I am not pitching any scripts or story lines for the next Batman project. Nor am I trying to procure a position for myself in the Warner Bros. Story Department. What’s more, I’m sure that Warner Bros. has been inundated over the years with unsolicited suggestions by other prescriptive Batman fans.

But given my severe disappointment with Batman & Robin after I admired the first Batman so much, I feel the need to recall the inherently dramatic elements that make Batman such a compelling property. On the other hand, if Warner Bros. insists on treating the character as a one-dimensional figure to be satirized or ridiculed, the studio risks alienating Batman’s core audience.

If Warner Bros. continues making Batman movies according to its current formula (multiple villains, crowded story lines, hasty characterization, special effects and comedy overshadowing narrative credibility), your future sequels might open well, but they will probably sink out of sight. And I would like to see Warner Bros. prosper by making movies that maximize their material’s best potential.

If you want to preserve the integrity and the profitability of one of the most enduring figures in popular culture — if you want to make fascinating action films that elicit good word-of-mouth, repeated viewings, and repeated ticket-buying — I urge you to return to the character-driven drama of the first Batman movie. I urge you to make Batman human again.


So went my words back in 1997. I’m not swell-headed enough to think that someone gave Christopher Nolan my letter and he got with the program. Instead, I think that a lot of other people who respect the character of Batman, Nolan included, shared most of my thoughts on what Warners was doing wrong and acted to right the situation — as Nolan certainly has. However, he seems to perpetuate the older sequels’ more-than-one-villain-per-film recipe, which I think he should avoid.

One other amusing piece of trivia: shortly after I sent my letter to them, Daly and Semel resigned as the chairs of Warner Bros. Far be it from me to claim that my letter was the cause of their resignations, but I can’t help wondering if their mishadling of the Batman franchise — and the dismal box-office performance of Batman & Robin in particular — played some part in their unexpected departure.
Posted by Rob in L.A. at 1:56 PM

saw this a few days ago...
i've never really been into reading comic books and such so i guess i wasnt able to get into this movie like others did...

i just thought, the movie just seemed way TOo long..

Thanks for posting, T.J.! I liked the movie, but I suppose that not everyone needs to like the same film.

Hey, you could have always snuck into the theatre next door to see Mama Mia! That’s an idea!