Another Casting Controversy: ‘The Nightingale’ 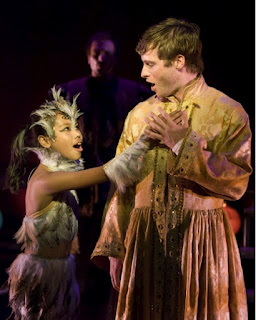 Echoing my post “Yellowface Top Ten,” another casting controversy has been recently roused.  The La Jolla Playhouse in San Diego, California, has originated a new musical (one still in development, in fact) called The Nightingale, based on the story by Danish author Hans Christian Andersen, with music by Duncan Sheik and lyrics by Steven Sater, the team behind the hit musical Spring Awakening.  Andersen’s story, you might know, takes place in long-ago China, a setting that the new musical preserves.  From the news reports I’ve read, Sheik, Sater, and director Moisés Kaufman did not see The Nightingale as taking place in the China of history; they saw it set in a China of the imagination, China as envisioned by a 19th-century Danish writer.  For this reason, they say, they decided to cast The Nightingale “colorblind”: auditions for the musical were open to actors of all races  The result is a cast that is largely non-Asian, with a Caucasian actor playing the protagonist of the Chinese Emperor and an African American actress playing the Empress Dowager.  Only two performers in the twelve-member cast are Asian American.

The Nightingale’s casting sparked some heavy criticism by Asian American actors and others in the arts community for not casting all of its parts with performers who are ethnically Asian.  The controversy has become so widespread that the artistic director of the La Jolla Playhouse, Christopher Ashley, has scheduled a discussion on the subject following the musical’s matinee on Sunday.  I appreciate the people of the La Jolla Playhouse for taking the issue so seriously.  When Asian American actors complained in 1990 over the casting of British actor Jonathan Pryce in Miss Saigon’s Asian male lead, the producer cancelled the show’s upcoming Broadway premiere until Actors Equity dropped their objections.  It’s nice to see the La Jolla Playhouse taking a different tack because I agree with the Asian American actors’ complaints.

Now, I haven’t seen The Nightingale, but there is no doubt in my mind that the show as it now stands is a good one.  I don’t doubt that the present cast — Caucasian Chinese Emperor and all — execute their roles with the utmost professionalism and aplomb.  I might even regard their performances as excellent.  My issue is not with these thespians themselves; my issue is with the creative team of Kaufman, Sheik, and Sater and their decision to cast The Nightingale in this way instead of casting primarily Asian American actors in these roles.

By casting The Nightingale colorblind, Kaufman and company disregarded an important issue: Asian American actors do not have equal opportunities to play roles, especially lead roles, in the mainstream American entertainment industry.  Most roles on Broadway or in Hollywood are written as non-Asian, and Asian American actors are rarely considered for such parts.  So, this automatically tilts the industry’s playing field in favor of non-Asian actors.  Also, the entertainment industry has a long and troubled history of casting roles written as Asian with non-Asian actors while seldom, if ever, allowing the reverse.  As a result, whenever a non-Asian is cast as an Asian character — however well intended — this diminishes already scarce opportunities for Asian American actors and perpetuates a racially discriminatory double standard in casting.

The issue that I’ve just stated is often misrepresented by its detractors as, “This means that only Polish American actors will be able to play Stanley Kowalski.”  No, it doesn’t mean that: Polish American actors don’t suffer from racial discrimination.  Asian American actors, by contrast, are subject to the unspoken racial assumptions of Broadway and Hollywood.  The issue isn’t ethnically specific casting; no one is saying, for example, that only Danish actors can play Hamlet.  The issue is the entertainment industry’s preferential treatment of its Caucasian talent over its minority talent.

If the La Jolla Playhouse cast more of its shows colorblind, its creation of a multi-racial China in The Nightingale might be viewed differently.  But this is one of the Playhouse’s few productions calling for Asian lead roles.  As such, I believe that The Nightingale’s creative team should have given priority to Asian American actors for their show’s cast.  I think that professional theatres (including regional theatres like the La Jolla Playhouse) and movies should continue this practice until it achieves true parity among actors of all races.  Once this is accomplished, controversies about casting according to skin color will go the way of all flesh.