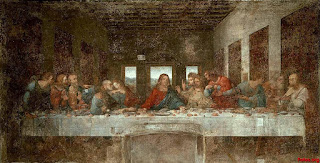 Today, I’m posting a picture of Leonardo da Vinci’s famous mural The Last Supper (Il Cenacolo, 1495-98).  Since the painting depicts the even more famous story of Jesus of Nazareth’s final meal before his arrest by the Romans, it’s my way of acknowledging Easter.  I’m not a Christian, but I thought that Easter was a good excuse to recognize da Vinci’s marvelous — if dilapidated — work of art.

Although I’m not a Christian, another thing I’m not is a conspiracy theorist.  And, regrettably, da Vinci’s masterful mural has become best-known in recent years as a puzzle “decoded” by the bestselling novel The Da Vinci Code by Dan Brown.

The jumping-off point of the puzzle’s “solution,” according to Brown, is the feminine-looking figure directly to Jesus’ right.  Brown notes that if you moved this figure to Jesus’ left, the figure would appear to be laying its head affectionately on Jesus’ shoulder.  Brown interprets this intriguing juxtaposition of the people in the painting to mean that the figure to Jesus’s right is actually a woman, who was Jesus’ secret romantic love.  From this idea, Brown spins a narrative of Jesus and the “woman” — whom the author interprets to be Mary Magdalene — having children, a narrative suppressed (in the novel) by the Catholic Church.

One of the effects of the novel’s popularity is that it has caused some readers and critics to re-evaluate the role of women in the Christian church (especially the Catholic Church) and re-evaluate the humanity of Jesus.  I believe that these are worthwhile outcomes of Brown’s fiction, but if you know the background of da Vinci’s The Last Supper, the puzzle that Brown constructs is a little on the discomfiting side.

The figure seated to Jesus’ right in da Vinci’s mural is the Apostle John, later known to Christians as St. John, the putative author of the biblical gospel that bears his name.  The Gospel of John is widely considered to be the last of the four biblical gospels (the others being the gospels of Matthew, Mark, and Luke) to have been written.  For this reason, St. John the Apostle has long been depicted in Christian art as quite youthful in comparison to the other eleven of Jesus’ disciples.  This explains why John’s likeness in The Last Supper is beardless, while the other disciples appear more hirsute.

Also, the story of the Last Supper in the Bible describes the Apostle John leaning on Jesus’ chest (“bosom”) upon hearing the news that one of his disciples will betray him (John 13:23-25).  The biblical Last Supper was portrayed multitudinous times in Christian art before da Vinci’s painting, and many (perhaps most) of these older artworks depict John leaning his head against Jesus’ chest or shoulder at this moment.  Da Vinci was originally going to depict John this way as well, but the painter changed his mind.  Still, he kept John in the “slouching” position that the figure would have been in had the artist stuck to his original design.  Some art historians think that da Vinci kept this rather awkward positioning of John in order to acknowledge the bosom-leaning in the biblical narrative.

If you know this history of da Vinci’s The Last Supper and the depiction of the biblical event in the mural’s artistic antecedents, it’s difficult to give yourself over to Brown’s very fanciful extrapolation.
Posted by Rob in L.A. at 9:47 AM