Is Hollywood Hedging Its Bets? 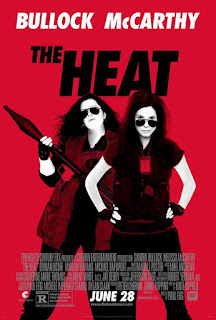 Given how far this actress has come in such a relatively short time, nothing but congratulations are due all around — both to her and the Hollywood studio that has boosted her into that rarefied celebrity status of movie star marqueed only by surname.  Where there was once Garbo, Crawford, Schwarzenegger, and Stallone, now comes (no first names, please) McCarthy.

No, not the 1950s senator from Wisconsin.  That last name belongs to Melissa McCarthy.  Although fans of that consummately scripted TV series Gilmore Girls (2000-07) have long admired McCarthy’s bubbly presence on that show as Sookie St. James (as, I suspect, do followers of her current sitcom, Mike and Molly, which I have not seen), the actress truly grabbed the movie-going public’s attention in the role of the single-minded Megan in the unexpected hit Bridesmaids (2011).  From there, more quickly than you would expect from an actress busy with a sitcom, she landed the co-starring role of the title character in Identity Thief (2013).  Now appears her single-name, above-the-title co-starring credit in the upcoming Twentieth Century Fox release The Heat (2013).  For any thespian, this would be a meteoric ascent.


But it seems especially true for a plus-size actress.

I’m sure I don’t need to tell anyone that Hollywood is notorious for turning its cameras on leading ladies whose body-fat ratio is well below average.  The last time that Hollywood had a major female star who was something other than svelte was in 1930, when the matronly Marie Dressler rose all the way to the top of the box office.  But this was back in those years when movie-going was seen as a family affair where the mothers chose which titles to attend, mothers who apparently identified with Dressler’s world-weary matriarchs.   (While venerated headliner Meryl Streep’s figure wouldn’t exactly be described as willowy these days, the adjective applied back when she first broke into Hollywood.)

Yes, as an overweight female film star, Melissa McCarthy’s career so far seems to have some predictable perimeters: she has only been featured in comic roles; she hasn’t broken above second billing.  But this early in her big-screen career, I’m willing to trust the cinematic fates to exceed those usual boundaries.

And yet, something bothers me a bit when I see Fox’s movie posters for The Heat.  Why is top-billed (and trim) actress Sandra Bullock standing in front of McCarthy in the way that she is?  I’m not annoyed by the idea that a well-established box-office luminary might take some precedence ahead of a second-billed player fresh to Hollywood’s star-making machinery.  No, I’m bothered by the idea that Fox is using Bullock’s image to obscure McCarthy’s ample dimensions.

This reminds me of those two times when two stars of the Hong Kong film industry, Chow Yun-Fat and Jet Li, broke into Hollywood with their first starring vehicles.  Chow’s movie was The Replacement Killers (1998) and Li’s was Romeo Must Die (2000).  In the posters for these two action films starring male leads from East Asia, both were wearing sunglasses.  Perhaps the Foster-Grants were primarily there to instill an aura of coolness.  But the sunglasses did something else: conceal the eyes of two new male stars from Asia whose eyelids are shaped differently than those of the male stars in Hollywood.

In the poster for The Heat, Bullock’s body seems to be doing to tyro movie-star McCarthy’s corpulent physique what the sunglasses did to tyro movie-stars Chow’s and Li’s eyes: not scare away filmgoers resistant to the idea of leading men and women who look different than the others.  With The Heat, Hollywood once again seems to be hedging its bets on whether cinema audiences are ready for a different kind of movie star.

Granted, this early in the game — several weeks before The Heat’s release — is too soon to be nitpicking at the picture’s politics.  And I wish the movie and its stars well.  But this tendency for Hollywood to downplay a newfangled star’s variance from the Tinseltown norm is worth mulling over for a minute.