God from the Machine 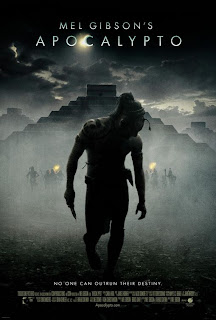 Usually, when something outside of a story’s established boundaries resolves that story’s central conflict, critics refer to that kind of ending as a deus ex machina.  This means “god from the machine,” a reference to ancient Roman dramas where an actor playing a deity would descend onto the stage, riding in some contraption, in order to bring an end to a story whose conflicts and problems were too complicated to be untangled any other way.  An example includes the out-of-nowhere earthquake (or something like one) that solves all the crises at the end of Dickens’ Little Dorrit (1857).  Deus ex machina endings are usually quite unsatisfying because an audience has (one hopes) become involved with the dilemmas of a story’s characters, only to have those problems concluded by some unconvincing contrivance.

There are exceptions to this, though.  The earthquake in Little Dorrit may have come out of nowhere, but an earthquake at the climax of a story set in 1906 San Francisco is acceptable because the history of that terrible temblor is well known.  This doesn’t mean that some grand historical intervention can settle things in too pat or too tidy a manner, but what might look like an egregious artifice in one context might be acceptable to an audience prepared for something major to intercede in the characters’ lives.

That said, I’m not sure how satisfying the deus ex machina ending of Mel Gibson’s Apocalypto (2006) is.  For the length of the film, we become absorbed in the agonizing ordeals of a Mayan inhabitant of pre-Columbian America, only to see his antagonists and torments brought to a screeching halt by the arrival of Europeans.  On the one hand, the hero is passively rescued by a bolt from the blue, and audiences tend not to be keen on passive resolutions to stories.  On the other hand, the fact that Apocalypto is a major-studio (Disney) film set in pre-Columbian America in the first place (with its actors speaking in subtitled Mayan dialogue) sets up the viewer for the eventual inclusion of white faces in the story.  But it seems to me that a narrative “resolved” in this abrupt way was exactly the kind of story that Gibson wanted to tell.

Once one of Hollywood’s most bankable leading men, Gibson might be thought of these days more as the director of The Passion of the Christ (2004), the biblical film that became a lightning rod in America’s culture wars, just as that year’s presidential campaigns heated up.  It’s well known that Gibson is a traditionalist Catholic who believes in the doctrine of Extra Ecclesiam nulla salus, “outside the church, there is no salvation.”  Or put another way, if you’re not Catholic, you’re not going to heaven.  Religious faith is so central to Gibson’s worldview that he financed a very religious film, with a very doctrinal (and, some would say, anti-Semitic) message, out of his own pocket.  But Gibson’s mixing of religion and filmmaking didn’t end with The Passion of the Christ.

How do Gibson’s religious views inform Apocalypto?  To begin with, the film’s title has biblical connotations.  Literally, an “apocalypse” (from the Greek ἀποκαλύπτω) is a revelation, an uncovering of something previously unknown.  “Apocalypse” is also an alternate name for the biblical Book of Revelation.  Because the subject of that section of the Bible is the “end times” of Earth and the Second Coming of Jesus Christ, the word “apocalypse” has also come to mean any kind of catastrophe or cataclysmic event, particularly one that terminates something of considerable size or scope.  So, with its very title, Apocalypto carries instant associations with biblical revelation and with the end of the world. 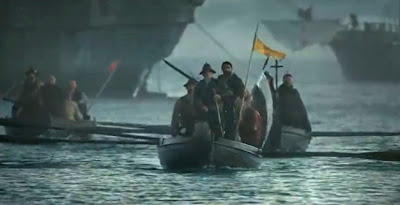 In the film’s climax, the long shot of the Europeans rowing their boats toward the shore of the American landmass includes the figure of a monk holding aloft a cross.  This is arguably the shot’s most prominent element.  Combined with the soundtrack score’s solemn but sweet music, and the awe with which the Mayan characters react to the sight of the ships, this climactic shot invites a religious reading.

Given Gibson’s theological leanings — and his willingness to incorporate those leanings into his filmmaking — I think that Apocalypto’s sudden conclusion is an analogy of the Second Coming, of the return of Jesus Christ from heaven, which is anticipated by many Christians.  Just as the European intruders portend the end of the way of life for Apocalypto’s Mayan characters, the Second Coming, Christians believe, will put an end to life on Earth as we know it.  And it will do so suddenly and without warning.

In other words, just as the agonizing ordeals of Apocalypto’s Mayan protagonist — that we have been witnessing for the last two hours — don’t really matter, given how his land will be utterly transformed by the European newcomers, the earthly strides and struggles of us mortals — that we have spent our entire lives experiencing — don’t really matter, given how they will ultimately come to an abrupt end, Christian teachings say, upon the Messiah’s imminent arrival.

The scene’s religious analogy isn’t all-encompassing: rather than moving towards the representatives of religion, like a good Christian, the pagan main character runs away from the boats and avoids them in the film’s denouement.  Still, the very last shot of the film is a curious one: the branch of a plant that the characters — who are obliquely shot and moving in and out of focus —brush past.  Given the incidental (if not unnecessary) function of this branch in the scene, one would expect the image to fade to black as soon as the characters leave the frame.  But the camera lingers for a few seconds on this odd image of the branch before dissolving into darkness.

Given the religious implications of the shot of the Europeans, the image of the leafy bough, while probably not the exact same vegetation, brings to mind the symbol of the palm branch in the Christian faith.  The palm is emblematically important in Christianity because the Bible says that Jesus’ triumphant entry into Jerusalem (riding on a donkey) in the days before his crucifixion was greeted by bystanders waving palm branches and strewing them onto his path.  This event gives the name to the Christian moveable feast of Palm Sunday, the Sunday before Easter.  So, to many Christians, since palm branches greeted Jesus’ arrival in Jerusalem, the palm is a symbol of Jesus’ imminent re-arrival on Earth.  Apocalypto ends on the lingering image of a palm-like branch, thus concluding on an icon of the Second Coming, reinforcing the foretold event’s importance to the film, as the delayed fade-out on the immobile branch is bewildering to the average viewer.

If one considers a boat to be a “machine,” liberally defined, and if one considers the monk on the boat as bringing the word of God, then one can regard the climax of Apocalypto as a — literal — deus ex machina ending.  Gibson resolves his main character’s torments with a grand intervention by an outside force.  But as a traditionalist Catholic, Gibson believes that — as grand as that outside force was — it was only a small-scale parallel to the great deus ex machina ending to the workaday lives of everyone on Earth, when providence so chooses.

The last four minutes of Mel Gibson’s ‘Apocalypto’
Posted by Rob in L.A. at 8:03 AM

An amazing movie that I wish would have a squeal to it!! I wish to see more of Rudy Youngblood in these types of movies, such an amazing actor!! I do hope to see more of him in movies! The other characters as well are amazing as well!! MAKE MORE MOVIES!! ADD MORE RUDY YOUNGBLOOD IN IT :D