Tomorrow Belongs to You — If You Speak English 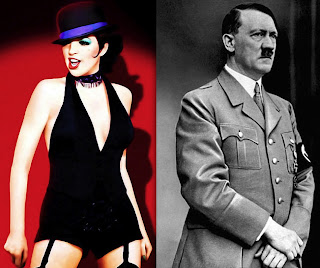 I suppose that if you know enough about a subject, you have a hard time accepting its compromised representation in the movies.  Not everybody knows as much about what that film is portraying, so its makers sometimes need to take artistic license with the subject in order to make it more comprehensible to people who have better things to do with their time than learn as much about the topic as you.

For instance, I have a brother who’s a musicologist specializing in the music of Medieval Europe.  He absolutely refused to see the fanciful film A Knight’s Tale (2001), which is set in Medieval Europe but scored with more recent rock hits. Anyone with a knowledge of the modus operandi of current Hollywood can understand the film’s choice of rock music as a hook for younger contemporary audiences, but the filmmakers’ decision to score the movie that way must have looked to him like dissing his specialty.  Similarly, I wonder how many experts in Spanish history can’t get past the decision of Aguirre, the Wrath of God (1972) to put the historical figures of conquistador Lope de Aguirre and friar Gaspar de Carvajal (who may have never met) on the same South American expedition, when their different expeditions were separated by some 20 years.

I don’t consider myself an expert on Nazi Germany, but I’ve looked into the subject enough to spot a few inconsistencies with history in the multitude of movies set during or near World War II.  When you start to study the Nazis, one of the first facts about them that you encounter is how ultra-nationalistic they were.  It’s not for nothing that “Nazi” is short for Nationalsozialismus (“National Socialism”) — Hitler, Goebbels, and their ilk were constantly stoking the nativist impulses of their German followers.  Whenever I think about the Nazis (which, to keep myself sane, isn’t all that often), one of the first things about them that comes to mind is just how wacko they went with their extreme brand of nationalism.

Consequently, whenever I see a Nazi speaking English in a movie made for Anglophone audiences, I need to work extra hard to suspend my disbelief.  One exception is when a movie’s characters consist entirely of people who are supposed to be speaking to each other in German; then I can hear the English more easily as a substitute language.  Also if the film can contextualize its setting so that a Nazi would logically speak English (for example, 1953’s Stalag 17), I can more readily accept that kind of portrayal.  But when a film includes a variety of nationalities — with some non-German characters standing in opposition to the Third Reich — and Nazis speaking to each other in English, my suspension snaps.  During the Third Reich, a German speaking English would be seen by the Nazis as an advocate of decadent cosmopolitainism.

This brings me to Bob Fosse’s Cabaret (1972), his film version of John Kander and Fred Ebb’s 1966 Broadway musical, which was, in turn, adapted from two other sources.  One of the best-known songs from the 1930s Germany-set musical is “Tomorrow Belongs to Me,” an anthem-like song belted out in English by a Hitlerjunge to an audience of other Germans in a Biergarten.  When I watch this scene on stage, I can accept this character’s incongruous use of the English language, placed against the artificiality of the stage’s set design, as a contrivance needed to communicate with the English-speaking audience.  However, in the naturalistic setting of Fosse’s film, this Nazi singing to other Germans in English strikes me as a supremely surrealistic moment: he’s calling for national pride by singing in the language of another nation.  As euphonious as Fred Ebb’s lyrics are, I don’t think that they are absolutely necessary to the scene.  In fact, given that the scene is supposed to convey the rising of a virulent German nationalism, the English lyrics subtract from the scene’s believability.

All of this is a roundabout way of saying that in Bob Fosse’s film version of Cabaret, “Tomorrow Belongs to Me,” I believe, should have been sung in the German language.  And I don’t think that the song would even need subtitles to convey the swelling forces of fanaticism that are engulfing the lead characters (played by Liza Minelli and Michael York).

Watch the German-dubbed scene below, and see if you can imagine it inserted, unsubtitled, into Bob Fosse’s otherwise Anglophone film version of Cabaret.  I think that such a treatment would (1) fit better with the film’s more naturalistic environment, (2) more accurately convey the extreme German nationalism that underlay the Nazi movement, and (3) instill a slight sense of incomprehension into non-German-speaking audiences that would mirror the main characters’ own inability to understand what’s going on around them.

Note: “Tomorrow Belongs to Me,” in this rendition, is translated as “Der morgige Tag ist mein.”  “Morgige Tag” is an archaic, poetic way of saying “tomorrow” (Morgen) in German.  So, to use an English equivalent, the German title literally means “the morrow is mine.”

Also, in case you’re wondering why the old man with the blue cap and the round glasses in the scene looks so confused, his cap marks him as a member of the German Communist Party (which is different from that of the Soviet Union), so this elderly political leftist is probably bewildered by the rise of Germany’s extreme right wing.
Posted by Rob in L.A. at 5:19 PM