The Difference Between Negotiation and a Threat 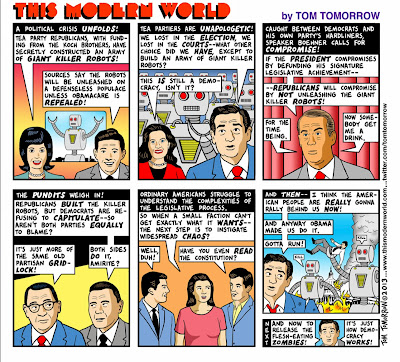 I couldn’t let the government shutdown and manufactured debt-ceiling crisis pass without comment.

Republicans are calling for Democrats to “have a conversation” with them and “negotiate” ending the debt-ceiling “debate.”  Negotiation is a matter of give and take: “You give me something reasonable that I want, and I’ll give you something reasonable that you want.”  That’s called compromise.  “You either give me what I want, or I’ll inflict a financial catastrophe upon the country and the world” is not a negotiating position; it’s a threat.  That’s called “taking hostages.”

And the fact that one of America’s major political parties has sunk to the level of making threats in order to sabotage something that is supposed to benefit all Americans, accessible and affordable health care, is beyond Machiavellian.  This sad situation epitomizes how inflexible and unreasonable the Republican Party has become in the service of an ideology that is antagonistic to betterment of the country as a whole.  (And if the Republicans disagree with this much-needed law, they should offer a reasonable alternative, instead of just calling for the legislation’s defunding or repeal.)

Fortunately, Tom Tomorrow’s This Modern World has a fitting — and devastating — analogy.
Posted by Rob in L.A. at 8:19 AM