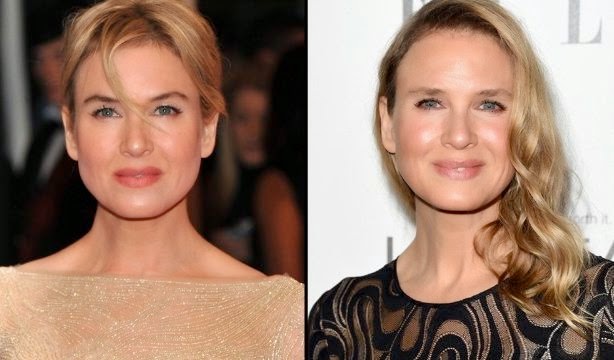 If you’ve been surfing the Web these last four days, you’ve undoubtedly had at least a glancing encounter with the negative buzz over Renée Zellweger’s new appearance.  You know that she attended Elle magazine’s 21st annual Women in Hollywood Awards on October 20, exhibiting a face that had obviously been retouched by plastic surgery, retouched to the point where it was virtually impossible to recognize the star of such popular movies as Jerry Maguire and Chicago.  The 45-year-old actress doesn’t seem to have had an enormous amount of work done — merely eyelid surgery, Botox injections, and a brow lift, according to one plastic surgeon — but the work that she did have done altered what was most distinctive about her face.

I haven’t been following the controversy (if that’s the right word for it) very closely, but my takeaway is this: lots people on social media criticized her new appearance (many of whom, inevitably, used snarky and tactless comments), and others responded to these critics, blasting them for “shaming” the practice of cosmetic surgery per se.  Zellweger herself has responded in a way that neither confirms nor denies that any facelifting occurred.  However, the idea that she may not have had plastic surgery brings to mind clichés about bridges in Brooklyn.

The “shaming” brouhaha raises once again the issues of how society views the aging female body in general, and of Hollywood’s adoration of the youthful female body in particular.  Observers “shame” Zellweger’s new appearance, and her defenders shame the shaming.  The defenders ask what a Hollywood female star past the first flush of youth, a star who hasn’t been seen on the screen for quite some time, must do to keep her career afloat.  And the discussion unearths the entangling root issue of women’s objectification by men.  Anne Helen Petersen writes in BuzzFeed:


Hollywood is horrible to aging women, broadly, but it’s particularly horrible for women [such as Zellweger] whose images are rooted in a youthful form of themselves. It’s not just Lindsay Lohan, in other words, who has to struggle with expectations pinned to a much-younger version of herself. That’s why Julia Roberts and Reese Witherspoon keep playing variations on the same roles, praised for their apparent agelessness, and why Demi Moore and Nicole Kidman struggle to reinvigorate their stardom. Indeed, the most flattering form of praise for a longtime female star isn’t “Look at their varied and complex career!” but “[Insert Star Here] Doesn’t Age!” ...

The last time we really “saw” [Zellweger on screen], she was [her youthful] image. Now she’s labeled a distortion of it, even though, in truth, it’s society’s reaction that’s the dark mirror of our expectations — not Zellweger’s still beautiful face.


However, without contradicting the insightful observations that several writers have made about the predicament of female stars in Hollywood, and what this says about the predicament of women in the larger society, I think this focus on “shaming” cosmetic surgery overlooks the obvious.  I think that Renée Zellweger’s surgically altered face has become such a big story precisely because she looks so radically different.  In particular, the surgery removed her face’s most distinguishing characteristics — especially her hooded eyelids and full cheeks — which gave her on-screen persona its unique personality.  Instead of Zellweger’s familiar attractive-in-a-slightly-quirky-way face, we now see a sculpted face lacking any truly special features.  Yes, as Petersen says, Zellweger is still beautiful, but she’s beautiful in a bland, uninteresting fashion.  She looks more like Daryl Hannah than the Renée Zellweger we’ve all come to know and appreciate.

By altering her appearance so drastically, I feel as though Zellweger defaced a national treasure, a treasure that would not have been defaced by time, a treasure now forever gone.  I get the idea that a lot of other moviegoers feel the same way, and that is what touched off the social-media frenzy, much more so than criticisms of plastic surgery in general.  This isn’t a matter of shaming.  It’s a matter of mourning.

Remembrance of things past
Posted by Rob in L.A. at 11:39 AM