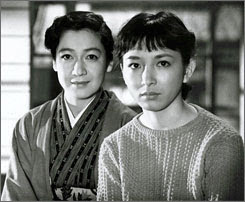 Since I can’t get around as much as I used to, I’ve been feeding my movie jones with a steady diet of Netflix. You don’t have to leave your home; DVDs come to you in your mailbox, and sending them back is easy — you can’t beat that!

I’ve recently been on a Japanese-movie kick (I seem to come down with one once a year). Early last month (October), one of the Japanese titles that I rented from Netflix was Tokyo Twilight (1957), co-written and directed by Yasujiro Ozu. I’m not a big Ozu fan — as many foreign-film buffs are — but I can appreciate his austere, Zen-like style of filmmaking that breaks so many of Hollywood’s cinematic laws. Still, as agreeably unconventional as Ozu’s way of shooting a film is — low camera angles, characters almost addressing the camera, eyeline mismatches, “empty” shots unrelated to the characters’ actions — the narratives that his movies convey are utterly conservative through and through. However subtle and restrained, his films use their exacting style to impart stories that are dispirited by Japan’s postwar modernity and nostalgic for a return to “traditional” Japanese values rooted in feudalism. For this reason, Yasujiro Ozu is not one of my favorite directors. His use of an innovative filmmaking strategy to tell such old-fashioned stories is a bit like a heavy-metal rock song extolling the virtues of prohibition.

As I watched Tokyo Twilight, nothing about the film changed my opinion of Ozu. The story tells of a Father (Chishu Ryu) whose wife deserted him, early in their marriage, for another man, leaving the Father with two small daughters to raise. Now grown to adulthood, the elder daughter, Takako (Setsuko Hara), is in an unhappy marriage, arranged by her Father, and she is the mother of a toddler daughter. The situation at Takako’s house has become so stressful that she and her daughter are staying at her Father’s house until she can figure out her next step. The unruly younger daughter, Akiko (Ineko Arima), is now in her late teens, still living with her Father, and verging on delinquency. In her wanderings around Tokyo, Akiko comes across an older woman, Kisako (Isuzu Yamada), who oversees a low-rent gaming establishment. We later find out that Kisako is Takako and Akiko’s mother, newly returned to Tokyo (the man she left the Father for was killed in World War II). Akiko learns that she’s pregnant, but the young man responsible won’t commit to her. She gets a back-alley abortion, but her experience leaves her emotionally wrecked. When she sees how indifferent the young man is to her ordeal, Akiko kills herself. After Akiko’s funeral, Takako goes to see Kisako and angrily tells her that she is responsible for Akiko’s death. Viewing Akiko’s disobedient personality and her death as what happens to a child raised by only one parent, Takako leaves her Father’s house and returns with her child to her husband.

Got that? A cautionary tale against premarital sex and abortion, women unhappy with their husbands compelled to stay with them, mothers blamed for intergenerational problems but fathers let off the hook — assuming that he could read the subtitles, Dan Quayle would love this movie.

Three days after I mailed the DVD of Tokyo Twilight back to Netflix, I saw in the entertainment section of the Los Angeles Times that there would be a revival of that same Ozu film in just a couple of days at the Los Angeles County Museum of Art. The announcement came in a capsule review of the movie written by Kevin Thomas. In his article, Mr. Thomas downplayed the film’s conservative messages to concentrate on the singularity of Ozu’s cinematic style and the director’s “compassion” for his characters. I had no intention of starting a debate with Mr. Thomas (which never happened, in any case) nor of discouraging anyone from seeing Ozu’s films, but having just viewed Tokyo Twilight a few days ago, I thought that I would write Mr. Thomas about my differing thoughts on the film. Here is the e-mail I sent:

I was surprised to see your review of Yasujiro Ozu’s Tokyo Twilight in [the entertainment section] because I had just rented the same film on DVD.

You also say that Ozu “has faith that children have the capacity to learn from their parents’ mistakes and not repeat them.” To me, Ozu seems to be saying that the younger generation has everything to learn from its elders and nothing to teach them. After seeing the tragic results of [Kisako] leaving the father, [Takako] decides to return to her “hard-drinking, thin-skinned” husband for the good of their child — with no adjustment on the husband’s part. What kind of marriage will she be returning to? Will the problems that drove [Takako] from her home be ameliorated in any way? Ozu doesn't seem to care.

For all the critical praise of Ozu’s “radical” style, few have noted how deeply conservative Ozu’s stories are. To me, his later films say that Japan has been corrupted by postwar values and modernity, and that the only way to undo this corruption is a return to traditional Japanese values of patriarchy and filial piety.

I’m not criticizing Ozu for failing to pass some liberal litmus test — there are several movies I like which could be considered conservative in one way or another — but Ozu’s films, like few others, really clobber me in an unpleasant way with their anti-modernity, anti-feminist sentiments. I wonder if some Ozu champions (I’m not saying that you’re one of them) overlook how reactionary his stories are by focusing on the uniqueness of the Japanese culture.

Oh, well, at least Ozu makes distinctive films. And I’m not trying to discourage anyone from seeing them. (Fun fact: Isuzu Yamada [who plays Kisako] is only three years older than Setsuko Hara [who plays Takako, Kisako’s daughter].) I just thought I’d pass along my own thoughts about a film that I just saw this past weekend. Thanks for reading.

“Tokyo Twilight” by Yasujiro Ozu depicts how Japan surrendered to militarism and after defeat in WW2, to a feverish industrialization and modernization, put its citizens in both these situations in a near impossible psychological turbulence. People had to forget themselves start acting like cheerful robots. Leaving today with permanent wars and with financial collapses (created by our American financial elite) we as viewers of Ozu’s film find ourselves in similar circumstances as the Japanese people in the middle of 20th century and feel that by describing the simultaneous presence of maniacal and depressive drives in Japanese life Ozu is talking to us Americans of 21st century.
The main character of the film Sugiyama, a banker and the father of two grown-up daughters is a person whose wife abandoned him and their children long ago. Her sudden appearance in the plot is telling of mute appeal on her part – not for forgiveness but for contact, communication and confession. But buried feelings between x-spouses and them and their adult children are enveloped by an almost solemn silence. This existential silence is helped by Zen-Buddhist legacy with its meditative accent.
Ryu Chishu playing Sugiyama acts not only the part of a concrete person with a particular destiny but impersonates Japanese sensibility under the regime of a despotic industrialization/technologization (treating people as its slaves and servants instead of serving their interests). The “Zen”-silence about personal matters and problems resonates with existential silence about social problems.
Special achievement of this film is the acting of Tetsuko Hara (famous for her work in Kurosawa’s early films) with her ability to interiorize and contain emotions of grief. Her silent torment about her family situation is colored by compassion of co-suffering with the world abandoned by the emotional care. But Tetsuko Hara is also critical about the character she plays for her inability to talk about the tormenting emotional truths, for the timidity of her smile of compassion.
Please, visit: www.actingoutpolitics.com to read essay about “Tokyo Twilight” (with analysis of stills from the film) and also essays on films by Godard, Resnais, Bergman, Bunuel, Bresson, Kurosawa, Pasolini, Fassbinder, Antonioni, Cavani, Alain Tanner, Bertolucci, Herzog, Wim Wenders, Maurice Pialat, Anne-Marie Mieville, Ken Russell, Rossellini Jerzy Skolimowski, Moshe Mizrahi and Ronald Neame.
Victor Enyutin