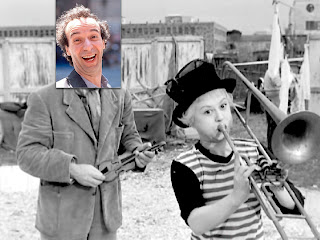 In many ways, Federico Fellini’s La Strada (1954) is a near-perfect film.  From its opening shot of the idyllic seashore, the film abruptly switches to a scene of an impoverished mother selling off her child, a scene that might have come from a miserablist Italian neo-realist film.  After this, La Strada beautifully balances its somewhat paradisical view of the rustic countryside with its more realistic view of the hardscrabble people who live there. Anthony Quinn’s turn as the cudgel-faced itinerant strongman Zampanò and Giulietta Masina’s as Gelsomina — the clownish, childlike woman he “buys” from her mother and often abuses — remain two of my favorite performances in cinema.  The musical score by Nino Rota has rightly become legendary.  And Otello Martelli’s camerawork captures both the lyricism and the cynicism of Fellini’s vision.


But in other ways, La Strada bugs me a bit.  One way is its depiction of a woman, even one who’s mentally underdeveloped, faithfully sticking by the man who abuses her.  Granted, Gelsomina makes one unsuccessful attempt to escape Zampanò, and her innocence makes his brutishness all the more apparent.  And Fellini obviously isn’t advocating spousal abuse.  So, this issue isn’t enough to repel me from the film.


However, another facet of the film also bothers me whenever I watch it: I think that Richard Basehart was miscast as Il Matto — the Fool.


Now, I don’t mean to challenge Basehart’s talent as an actor.  In the right role, he can be a very compelling screen presence.  My favorite Richard Basehart performance is as a serial killer in the film noir He Walked by Night (1948).  His handsome face gives the appearance of an all-around regular guy, but the rest of his body language conveys something sinister lurking inside.  Speaking very few lines of dialogue for a movie lead, Basehart still seethes with a restless intensity that energizes every scene he’s in.  In He Walked by Night, Basehart was perfectly cast.  In La Strada?  Not so much.


The role of the Fool in La Strada cries out for a performer with a comic on-screen presence.  As an actor, Basehart can call upon many traits, but comedic warmth isn’t one of them.  The incongruity of the performer to the part is compounded by the choice of the voice actor who dubs Basehart in the Italian-language version of the film.  Where Basehart speaks with a moderately deep voice that one would expect from a man of his sturdy bearing and full-grown appearance, the voice synchronized with his lips in La Strada is a high-pitched near-falsetto.  To anyone familiar with Basehart’s speech from his other roles, the speaking voice of the Fool is a vexatious distraction.  But more than that, Basehart’s solid physicality clashes with the slightness of the Fool’s vocalization.  It’s as though the filmmakers tried to compensate for the on-screen actor’s serious demeanor with an ill-fitting comic voice on the soundtrack.


Okay, so all of this raises the question: Whom would I prefer to see in the role of Il Matto, the role of the Fool?


Of course, proposing to recast a canonical film like La Strada is as heretical to many movie buffs as proposing to recast Citizen Kane (1941) or any other cinema classic.  I appreciate these film aficionados respecting movie history as it now stands, but they can rest assured that I have no intention of sneaking into the vaults and replacing La Strada’s footage of Basehart with substitute footage of my own.

I can already hear some readers gagging on their garganelli as they read that last sentence.  And I can understand.  But I’m not saying that Fellini should have picked comic-actor Benigni over Basehart for the role of the Fool at the time the film was being made.  When La Strada was released in September 1954, Benigni was one month away from turning two-years old, and back then, I understand, he didn’t quite have his comedic chops down.  I’m merely imagining what a vintage film might have been like if one of today’s talents had been able to fill one of yesterday’s roles.  Indulge me for a moment.
Now, like a number of other critics, I agree that Benigni is — to put it mildly — not the most nuanced of actors.  For instance, I think that his Academy Award for Best Actor in Life Is Beautiful (La Vita è bella, 1997) was undeserved.  That film surprisingly pulls off the unlikely conceit of a Jewish father (Benigni) in a Nazi concentration camp convincing his young son that their imprisonment is only a game, but the Italian comedian delivers a one-note performance in a role that calls for a wide dramatic range.  I believe that the statuette was awarded more for the writer-director-star’s offbeat treatment of the Holocaust than for his emotional depth.  This particular Oscar can only be rationalized in that this apparently ever-optimistic character in this horrific situation was embodied by Benigni’s singular comic persona.
However, if he had been able to travel back in time and play the part of the Fool in La Strada, Benigni’s modest acting skills would have been compensated by the unique comedic qualities he could have brought to the role.  Where Basehart’s solid corporeality weighs down the Fool’s fluttering body, Benigni’s buoyant physicality is imbued with a lightness that billows above the more serious characters in his films.  In Benigni’s rubbery face and nonchalant disposition, I can see the character who dispassionately defies death on a tightrope, the character who temerariously taunts the furious Zampanò in one scene and then casually asks for his help changing a tire when they next meet.
Also, had Benigni played the Fool, Zampanò’s manslaughter of such a joyful and gentle soul would have compounded the strongman’s brutish behavior even more, as though he had killed Harry Langdon or Harpo Marx — as though he had killed a true double for Gelsomina.  (Perhaps such a spiritual kinship to wife Giulietta Masina, who plays Gelsomina, is why Fellini chose Benigni to star in the director’s final film, The Voice of the Moon [La Voce della luna, 1990].)  As it stands, Zampanò’s murder of the serial killer from He Walked by Night just isn’t as effective.
But you might say to me, “Benigni was still in diapers when La Strada was made.  Why even bother imagining such far-fetched transhistorical casting?”  Okay, fair point.  But I would at least like to see an actor with more comic warmth as the Fool.  If a would-be time traveler is too preposterous for you, how about a comedic contemporary of La Strada like Alberto Sordi?  After all, he was the star of Fellini’s two previous pictures: The White Sheik (Lo Sceicco bianco, 1952) and I Vitelloni (1953).  Which leads me to wonder: Did Fellini offer Sordi the part of La Strada’s Fool?  And if the director did, would the movie-star Sordi have accepted this supporting role?  As Il Matto himself might say, foolish questions.
For all I know, Fellini’s casting of Basehart as La Strada’s Fool is a stroke of cinematic genius that I’m simply too dense to see.  But my foolish imaginings remind me that movie viewers aren’t just passive spectators of the mass or classic images in front of us. In a manner of speaking, we’re co-creators of the way these visions and stories inhabit and interact with our minds, as the phenomenon of fan fiction can show.  And — who knows? — maybe our daydreams might eventually intervene in and impact the concrete world beyond our mind’s eye.  In that case, maybe my imaginings aren’t so foolish after all.
Scenes from ‘La Strada’
Posted by Rob in L.A. at 6:37 PM

Very interesting entry in your blog. I guess you were too impressed by Basehart’s performance in “He walked by night” and you couldn’t shake off that role of your mind when you watched La Strada. I had the benefit to first watch La Strada without even knowing Basehart’s name. So, I didn’t even notice the actor was an American guy; I was so enthralled by the movie and everybody’s performance that I didn’t care to find out who the actor was. He was “Il Matto” period.
But your point is very valid, it would have been very interesting to see a more genuinely “comical” actor in the role; it would have been a very different movie, and as you said, it would have made Zampano even more brutish.
As it is, I love the ambiguity that is the very core of La Strada. Il Matto is a buffoon but it has a dark side too; he is lighthearted but he also verbally abuses Gelsomina. He has a very positive philosophy of life but he also has an egotistic manner that makes him closer to Zampano than to Gelsomina (remember he says “I don’t need anybody” to Gelsomina when she refuses to go with him, and the same phrase is repeated by Zampano at the end). As critic Peter Bondanella said, Il Matto is an angel figure, but a fallen one.
A funnier actor may have brought more sympathy to the character but take some of the complexity away. For me, Basehart is funny and sensitive enough while keeping some of the subtle darkness he had on most roles. I understand why Gelsomina –though attracted to him- wouldn’t go with him.
To answer your question, Fellini didn’t offer Sordi the part. Fellini offered the part to Basehart on his own initiative. Basehart was actually very surprised when Fellini offered him the role. He asked Fellini why, and Fellini’s answer was: “if you did 14 Hours, you can do anything”.
Congratulations for your blog.

I first learned about Richard Basehart as the star of the TV series Voyage to the Bottom of the Sea, which I caught every now and then as a young kid. I was still very young when I first saw He Walked by Night, and I remember Basehart’s performance being the first by an actor to really impress me (I have seen the movie again since). I learned of La Strada by reputation several years before I saw it (I remeber being struck by Anthony Quinn’s ferocious face the first time I saw still photos from the film), and having seen Basehart in He Walked by Night made me interested in seeing his performance in the Italian movie as well. So, I came to La Strada expecting to like Basehart as Il Matto.

I suppose that my overall qualm with Il Matto is that, as embodied by Basehart, he just doesn’t strike me as someone who clowns for a living. But then again, as you say, that may have been Fellini’s point: the director may have wished to play up the non-comical side of an allegedly comical character.

Call me thick as a brick, but it wasn’t until I watched the La Strada DVD with Bondanella’s commentary that I realized the rivalry between Zampanò and Il Matto may have had something to do with Rosa, Gelsomina’s sister who was also “sold” to the strongman — and with Rosa’s death. In that case, maybe Basehart’s matinee-idol looks and bearing hint at Il Matto drawing Rosa away from the feral Zampanò for romantic reasons. I’m always giving Il Maestro Fellini’s directorial decisions a big benefit of the doubt over my own peculiar predilections.

Thanks again for commenting.

I've never seen such foolish and rude opinions.
If that old ugly actor was cast in the role of IL MATTO, nobody would be attracted to the film except you.
He is a very important character in the movie and represents both innocence and loneliness. People would be angry if such a person were ugly rather than Jampano. A charming man should be pretty and gentle. It is not Miss Casting at all to me.