Although three-color Technicolor had been available since 1932 — with the first three-color feature film, Becky Sharpe, released in 1935 — the process was quite expensive, tripling a production’s cost.  Requiring four (after 1941, three) different rolls of film for each take, Technicolor movies in those early years were usually short subjects, animated cartoons, or highly prestigious features like The Adventures of Robin Hood (1938) and Gone with the Wind (1939).  But in 1951, with the introduction of Eastmancolor, a color process needing only one roll of film, polychrome features became more affordable and, because of the movies’ rivalry with the new medium of television, more common.

However, by the mid-1950s, Hollywood saw a film’s sale for TV broadcast as its most lucrative aspect, and since most television was still in black & white, the number of polychrome feature films actually declined.  With the arrival of color TV a decade later, virtually all Hollywood features were shot in color by 1967.

The five monochrome movies mentioned below — each, as it happens, from a different genre — were made during the years of color’s ascension.  So, had events worked out differently, a polychrome film may very well have been made instead.  But had these films been made in color, I don’t think that I would appreciate them quite as much as I do. 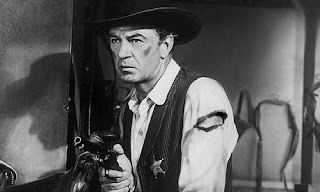 
Technicolor westerns had started as early as Henry King’s Jesse James in 1939.  While many westerns by the early 1950s were still shot in black & white, the trend was towards color.  The year 1952 saw the release of color westerns like Anthony Mann’s Bend of the River, Budd Boetticher’s Horizons West, and Fritz Lang’s Rancho Notorious; the next year would see Shane, The Naked Spur, and others.  So, it’s easy to imagine the producers of High Noon wanting their western in polychrome as well.  Instead, Fred Zinnemann’s chamber drama of a horse opera was made in black & white (more for economic reasons, I understand, than for any other).  In color, westerns could revel in the majesty of their wide-open-spaces settings, as well as hint at the glory of Manifest Destiny, as good people settled the American West.  But High Noon portrays its western denizens  in a more ambivalent light.

With an old enemy coming to town and promising to gun him down at “high noon,” a small-town sheriff (Gary Cooper) hopes to deputize a posse and prevent any gunplay — but he can’t find any townspeople to volunteer and has to face his enemy’s gang on his own.  High Noon’s black & white cinematography drains the town of any high-minded qualities and robs its story of any sense of moral triumph in the settling of the Wild West.  In other words, the film casts a rather cynical eye on figures usually eulogized by popular culture, which, given the mythologizing splendor associated with the western genre, would have been harder to achieve in color.  It also seems that director Zinnemann was something of a fan of black & white: when Columbia Pictures head Harry Cohn hired Zinnemann to direct the film adaptation of the novel From Here to Eternity (1953), the mogul envisioned a movie in color, but the director talked him into making it in monochrome. 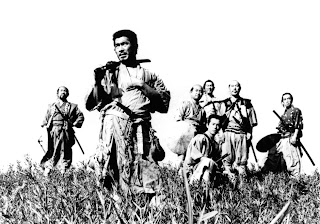 
Japan’s first color feature, Carmen Comes Home (カルメン故郷に帰る), was released in 1951, with notable color films like Gate of Hell (地獄門, 1953) following in the subsequent years.  Akira Kurosawa might have shot his epic Seven Samurai (七人の侍) in color, but he didn’t.  And we know the reason: the director was dissatisfied with the color processes of the time; in fact, Kurosawa wouldn’t make a color feature until 1970.  I’m glad that Seven Samurai is in black & white.  Like the Hollywood western in the context of the U.S., Japan’s samurai genre has a tendency to glorify the bygone years.  This effect is redoubled when the films are in color: the scenery and landscapes of a historical past shown in full hue sanctify the olden days as heroic, aiding a sense of majesty and epic sweep.  Such a rarefied setting suits the samurai genre’s stories of skilled swordsman besting their foes with impossibly impeccable dances of the blade.

But Seven Samurai isn’t a generic samurai movie.  For one thing, its title characters are not, in fact, samurai; they are rōnin, warriors without a master.  In fact, to call them samurai is slightly subversive.  A samurai, strictly speaking, is an underling to the aristocracy, not to the lower orders, and class divisions throughout Japanese history were extremely strict.  By calling these rōnin “samurai,” the film implies that the peasant villagers who employ these masterless warriors have impudently assumed the place of those higher on the social scale.  Also, the swordfights in the film are not the perfectly choreographed duels typical of the samurai genre but the kind of flailing swordplay more common in the world outside the theatre.  In color, Seven Samurai would have had a monumental grandeur, and this, in turn, would have glorified the on-screen actions that Kurosawa wants to deglamorize; it would have been one more mythologization of a past in need of greater humanization.  In color and widescreen, the film’s Hollywood western adaptation, The Magnificent Seven (1960), comes across as just another (though quite well-done) epic hagiography of the Wild West’s settling.  But in a standard-aspect-ratio black & white, Seven Samurai strips its story of a heightened sense of derring-do, showing battles not for glory, but for sheer survival.  In color, the film would be received as just another samurai movie.  In black & white, it’s clearly something more than that. 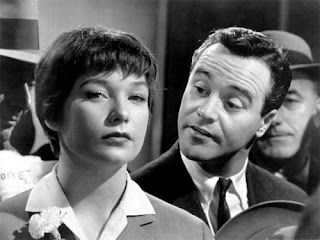 
Romantic comedies tend to be cute and overly optimistic.  The idea of two people falling in love while talking in zingers warms the cockles of our hearts by assuring us that true human tenderness does indeed exist, appealing to the romantic in all of us.  And color cinematography in romantic comedies is often used to highlight the hopefulness and idealism that we associate with boy meeting girl.  But some romantic comedies — some sterling examples of the genre, in fact — are not based on candy-coated optimism but more on the disenchanting aspects of human existence and sustenance.  One case in point is Billy Wilder’s The Apartment.  The film begins with an amusing but cynical situation: a low-level employee at a large New York insurance firm (Jack Lemmon) lets some of his superiors use his apartment for their extramarital affairs; he does this both in hopes of a promotion and to keep his job.  When the company head (Fred MacMurray, in his best role) finds out, he monopolizes the apartment for his own illicit liaison.  The worker is crushed when he learns that the unmarried elevator operator he’s taken a shine to (Shirley MacLaine) is the boss’s mistress.  However, her suicide attempt at his apartment throws the two together.

This set-up, to put it mildly, does not exactly have “romantic comedy” stamped all over it.  Adultery, attempted suicide, cravenly clinging to one’s workaday job — these aren’t topics that rouse our most idealistic selves.  Yet, Wilder manages to wring a witty and romantic story with a happily-ever-after ending out of such unpromising material.  The Apartment’s black & white cinematography conveys Wilder’s jaded view of his protagonist’s dilemma and the general dearth of human warmth in the big, cavernous city.  But monochrome is still versatile enough to brighten the screen when the boy finally gets the girl.  I can’t envision The Apartment being as effective in color.  In the flatly lit, eye-lulling polychrome of early-1960’s Hollywood, the Lemmon character’s ultimate renunciation of his superiors and their world wouldn’t have resounded quite so triumphantly. 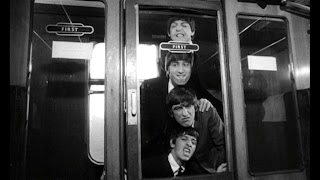 In the black & white of A Hard Day’s Night, the Beatles scamper and romp with an abandon that recalls the silent comedies of cinema’s earliest years.  The downscale associations that many viewers have with monochrome recalls rock & roll’s humble, unprestigious, underdog origins.  Also, director Richard Lester’s use of hand-held photography and location shooting — as well as the story’s picaresque structure — recalls the European New Wave films that had become so influential at the time.  But where so many of these New Wave features focused on stories of social discontent with downbeat endings, A Hard Day’s Night is a musical comedy (sans love story) fueled by rock & roll: as though the disruptive film grammar of the New Wave had finally found a musical and cultural companion to give an optimistic voice to the camera’s critical eye.

But while A Hard Day’s Night is, to me and many others, unimaginable in color, the film might have been shot that way if its producers had realized just how popular the Beatles were at the time, and how long they would last.  According to the making-of documentary on the film’s DVD, Lester says that shooting A Hard Day’s Night in black & white wasn’t a major artistic decision: he had only a short time to make and release the movie, and monochrome was Britain’s default film stock at the time.  Of course, once the Beatles’ first film had cleaned up at the box office, their second, Help!, a send-up of James Bond-style thrillers (also directed by Lester), was given a bigger budget and shot in polychrome.  That A Hard Day’s Night has proven the more enduring of the two affirms the power of its black & white images. 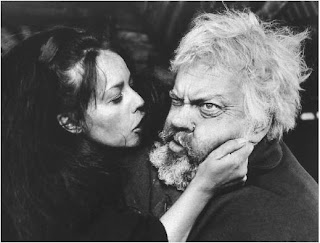 
Sometimes, I think that Orson Welles was physically incapable of making a bad film.  And of his 13 completed features, all but three of them are in a shadow-etched black & white.  Welles’s employment of the monochrome image is nothing short of extraordinary.  Even when using cinematographers whose work for other directors is unexceptional, Welles creates visuals with a depth and dynamism unlike any others.  One of cinema’s great ironic tragedies is that one of its greatest directors labored in the film industry for over four decades but finished only a baker’s dozen of titles.  And one of cinema’s great joys is that all of them range from good to superlative, including perhaps the best film ever made, Citizen Kane (1941).  Another Welles gem is one of his three Shakespeare adaptations, Chimes at Midnight, the actor-director’s condensation of the four plays featuring the character of Sir John Falstaff.


Co-produced by one of the men behind the James Bond films, Harry Saltzman, and made at the same time as a number of Hollywood historical epics, it’s something of a miracle that Chimes at Midnight wasn’t shot in color.  If it had been, I think that Wells’s more intimate take on Shakespeare’s stories would have been overwhelmed by the pageantry.  Color would have needlessly gilded and distracted from Shakespeare’s poetic dialogue, instead of complementing the words, as the film does, with more elemental visual forms.  And color might have unwittingly glorified the gut-wrenching sequence of the Battle of Shrewsbury, which, in monochrome, distills the soldiers’ grisly combat into the quintessence of war’s brutality and barrenness.  My favorite Shakespeare film, Chimes at Midnight is a wistful eulogy to “Merrie England” and, fittingly, Welles’s final finished feature in black & white, a tool he used so masterfully.
Posted by Rob in L.A. at 8:33 AM