Sticking Up for Shakespeare 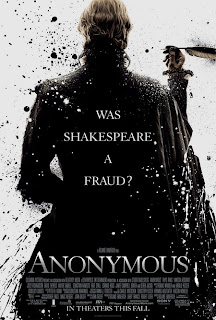 I was waiting to write this post sometime later, but now seems like as good a time as any.  As many readers know, a new film is coming out later this month called Anonymous, dramatizing the idea that William Shakespeare of Stratford-upon-Avon in Warwickshire, England, did not write the literary works attributed to him.  Recently, the publicity arm of Sony Pictures, the movie’s distributor, released a short video of the director, Roland Emmerich, citing ten reasons why he believes Shakespeare is a fraud.  I want to respond to Emmerich’s reasons point by point, but first, I would like to say a few words about the Shakespeare authorship question in general.

First of all, William Shakespeare of Stratford (1564-1616) is the overwhelming consensus among scholars and historians as the author of the plays and poems bearing his name.  Disputing this consensus is a fringe position largely undertaken by those who are not professional historians with academic credentials.  Armchair historians contesting Shakespeare’s authorship are akin to armchair scientists contesting Darwin’s theory of evolution or Einstein’s theory of relativity.

Secondly, Shakespeare wasn’t proclaimed the greatest writer in the English language during his own lifetime or in the century that followed: only by the late-18th century did his significance become a majority opinion.  The notion that William of Stratford did not write the works of Shakespeare is a relatively recent phenomenon that began in the mid-19th century, about the time that “Shakespeare” became a monument worth toppling.  Before then, there is no evidence that anyone doubted Shakespeare’s authorship.  The writer was successful and well-known during his lifetime, which presumably led to some public scrutiny, so if any contemporary skepticism existed, there should have been evidence for it back then.

To me, this entire authorship question is impelled by elitism.  The anti-Stratfordians (as Shakespeare doubters are collectively known) seem motivated by a refusal to believe that someone of such humble origins wrote the English language’s greatest works.  One anti-Stratfordian website addresses the snob factor this way: “The authorship question asks not who could have written the plays but who did.”  But why bother asking who did in the first place — and going against the enormous historical consensus — unless Shakespeare didn’t fit some pre-conceived notions about who could have?

I am not a Shakespeare expert.  For all I know, William of Stratford did not write any of the works bearing his name.  But to say that the historians’ common-view author did not write them — and moreover, that their true author’s identity was suppressed because of a vast conspiracy — is an extraordinary claim.  It’s difficult to believe that a scheme surrounding such an important matter could have begun some 400 years ago and not unraveled well before the 19th century.  As Carl Sagan said, “Extraordinary claims require extraordinary evidence.”  And the evidence that the anti-Stratfordians point to is not extraordinary.

The anti-Stratfordians’ first assumption is that records for those who lived in Elizabethan and Jacobean England should be as complete as today’s documentation.  For the era, record keeping in Elizabethan England was relatively extensive, and documents regarding William of Stratford, while not great, are as plentiful as those for the average middle-class Londoner of the time.  What gaps there are in the historical record can be explained by Shakespeare being a closet Catholic in an England where Protestantism was compulsory and where variation on this religious norm was seen as a sign of treason, which could be punished by death.  (For example, Jews were banished from Britain during this time.)  Many scholars believe that Shakespeare came from a Catholic household and had reasons to be secretive about his spiritual beliefs — in effect, about anything personal that couldn’t be veiled in a sonnet — for fear of his life.  To the extent there is a “Shakespeare mystery,” his clandestine Catholicism explains most of it.

Now, I’d like to focus on Emmerich’s specific reasons for disbelieving Shakespeare’s authorship.

A successful entrepreneur in the Elizabethan theatre, Shakespeare owned stock in his acting company, the Lord Chamberlain’s Men (later the King’s Men), and the building where they performed, the Globe Theatre (later other performing spaces as well).  In all likelihood, Shakespeare would not have written out full copies of his plays, only rough drafts (the so-called “foul papers”) that would then be copied out by other hands.  Once duplicated, these manuscripts became the property of his company, not himself.  Why didn’t Shakespeare write letters to his wife?  Because she couldn’t read, and evidence suggests that the writer didn’t really love her.  Why didn’t he write any surviving letters to anyone else?  Well, why put your innermost thoughts down on paper if they could be used against you by a state that regarded your family’s religion as treasonous?

By and large, women were second-class citizens in England (as well as elsewhere) in this era, despite the monarch’s gender.  Literacy for females was not a great priority (only boys attended grammar school).  Shakespeare — who might have spent most of his life in London, away from his Stratford family — would have needed to go to great lengths in order to make sure his daughters were literate.  The hypothesis of their illiteracy tells us nothing about the authorship of the plays.

3. Why would a common-born writer be so obsessed with the aristocracy and so intimate with the workings of upper-class politics?

First, politics were not unknown to Shakespeare’s family.  The writer’s father, John Shakespeare, held various offices in Stratford, including High Bailiff, the de facto mayor.  Second, once Shakespeare became a successful playwright early in his career, he evidently associated with members of the nobility, especially Henry Wriothesley (rhymes with “grisly”), the Third Earl of Southampton, to whom the writer dedicated his epic poems (Venus and Adonis and The Rape of Lucrece) and with whom he was apparently intimate.  This could have very well given him an insider’s glimpse into the workings of the aristocracy and their politics.  As for the plebeian playwright always “mocking his peers” and identifying more with those higher on the social scale, one Shakespeare play that upends this characterization is The Merry Wives of Windsor, in which members of the middle class humiliate a knight.

4. His six known signatures — none of them on literary works — are “shaky and inconsistent.”

This isn’t a very compelling argument.  Any number of factors could have prevented Shakespeare from having exemplary penmanship.

5. Why doesn’t Shakespeare mention the death of his eleven-year-old son in his very emotional and heartfelt sonnets?

The mission of the sonnet in Shakespeare’s time was for the writer to say just enough to express himself without blatantly spelling things out.  However, Shakespeare’s Sonnet 33 has been interpreted to be on this very subject, his young son’s death: “[M]y sun one early morn did shine/With all triumphant splendor on my brow;/But out, alack! He was but one hour mine;/The region cloud hath mask’d him from me now./Yet him for this my love no whit disdaineth;/Suns of the world may stain when heaven’s sun staineth.”  In this interpretation, the word “sun” is a melancholy pun on “son.”

6. Why doesn’t the writer with the largest English vocabulary in history show greater evidence for his education?

Listening to the anti-Stratfordians, one would think that reams of documentation existed for all students in 16th-century Stratford except William Shakespeare.  To the contrary, very few school records survive for any of Shakespeare’s Stratfordian contemporaries.  Also, there are anecdotes, with some possible supporting evidence, that young Shakespeare worked as a schoolmaster in Lancashire during his so-called “lost years.”  If true, this would suggest that by then, young William had acquired enough knowledge to pass on to others.

7. Why didn’t Shakespeare write plays and poems after retiring?

First, only three years elapsed between Shakespeare’s retirement in 1613 and his death in 1616.  In 1613, during a performance of one of his last plays, Henry VIII (co-written with John Fletcher), the Globe caught fire and was badly burned.  Afterwards, Shakespeare sold his shares in the company and retired to Stratford.  The burning of the Globe and his divestment from his theatre company may have given him a different outlook on playwrighting for the next three years.  Second, if he had written works in retirement, with whom would he have shared them?  With his conjecturally illiterate family?  And what is the likelihood that such works would have survived outside the city?  Also, after his retirement, Shakespeare continued to be involved in real estate in both London and Stratford, so that may have been where he put his energies.

8. None of Shakespeare’s plays are set in contemporary England, yet he never traveled outside the country’s borders, and his plays demonstrate a great knowledge of foreign lands.

The theatre was a suspect undertaking in Elizabethan London as a possible breeding ground for sedition.  In fact, in the years before, the theatre was illegal, and it was only legalized by Queen Elizabeth shortly before Shakespeare’s birth.  Because of this, authors had to be careful to avoid any appearances of inciting treason.  One way for a writer to achieve this was to set his plays in the distant past or in foreign lands.  As a result, none of Shakespeare’s plays are set in contemporary England (and the one that arguably may be, The Merry Wives of Windsor, has a lead character from the 14th century, Sir John Falstaff).  While there is no evidence that Shakespeare had ever been outside Britain, books with information about foreign lands existed at the time, books that the writer could have read.

9. An early image of Shakespeare’s monument in Stratford shows the man holding a sack and not a pen.

The image that Emmerich shows is from a 1656 book, The Antiquities of Warwickshire by Sir William Dugdale, but to quote Wikipedia, “the engraving was done from a sketch made in 1634 and, like other portrayals of monuments in [Dugdale’s book], is not accurate.”

10. Shakespeare’s will does not include any literary property, whether his own or by others.

Again, presumably all of Shakespeare’s literary output was the property of his theatrical company or the Earl of Southampton, not himself.

When all is said and done, I’ll probably see Anonymous when it is released.  As far as I’m concerned, anything that casts William Shakespeare in a prominent light is a net positive.  I only hope that audiences approach the film with skepticism and regard it as historically accurate as Shakespeare in Love.  But given America’s fondness for conspiracy theories — from the identity of J.F.K.’s assassin to 9/11 being an inside job — that may be too much to ask.

Good post and a solid response to Emmerich's points.

I don't know if it's a perverse fondness for conspiracy theories or an avaricious elitism that drive people to adopt such an absurd position. I suppose it's a combination of the two. People do insist on twisting up reality to fit their worldviews, regardless of the end result.

Like you, I'm hopeful that Will Shakespeare's legacy will survive the noise.