Another repost of something I wrote on BeatleLinks Fab Forum in 2005: 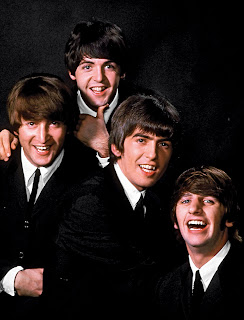 I was just thinking what a stroke of serendipity it was that the four Beatles each had such memorable names that — when put together in a phrase — rolled off the tongue so easily (an ad man’s dream). Just think of it: three monosyllabic first names common in the English-speaking world, followed by a more exotic, uncommon polysyllabic one to finish off the phrase. The list of the four names has its own kind of peculiar poetry.

After all, you don't usually go around calling the Rolling Stones “Mick, Keith, Charlie...” and whoever else happens to be in the group that day.  A simple “Stones” suffices. Not so with the Beatles.

Isn’t it sorta strange that things worked out so well? What if things had worked out differently?  If Pete Best had stayed in the band, I don't think that “John, Paul, George, and Pete” would have had the same ring (so to speak) to it.  If Paul had been known by his first name, instead of his middle one, “John, James, George, and Ringo” would have had the advantage of the first three names being alliterative, but I think that most Americans would have been put off by the formal sound of the full name “James,” and if it were shortened to “Jim,” John and George might have seemed a bit too stodgy for not also using nicknames.

On the other hand, what if they each had different names? Coming from England, where certain common names are not as common here in the States, it’s lucky that the monickers were so identifiable to us Yanks. What if this hadn’t been the case?  “Nigel, Trevor, Leslie, and Squiffy” would have been a definite non-starter.