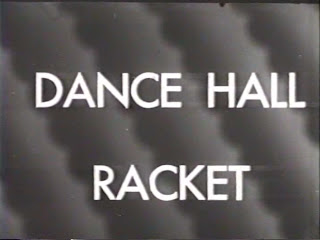 It took a poorly made 1950s exploitation movie to make me realize the importance of location filming to the development of cinema.  If motion-picture cameras had been confined only to the inside of the studios, I doubt that filmmaking could have been revitalized by Italian neo-realism of the 1940s, the international New Wave of the 1960s, or other independent film movements.  It’s not that these new cinema movements never used soundstages for their interior scenes, but location filming was absolutely vital. 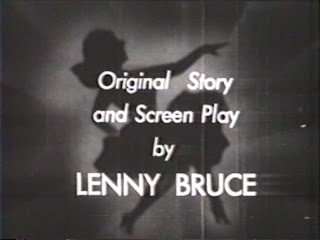 The work that made me realize this was Phil Tucker’s Dance Hall Racket (1953), a cheaply made, by-the-numbers exploitation movie whose only real distinction is that it was written by Lenny Bruce and marks his only appearance as a credited actor.  Unfortunately, the film’s wafer-thin plot — an underworld figure, Umberto Scalli (Timothy Farrell), uses the sleazy taxi-dance hall he runs as a front for diamond smuggling — barely materializes as a linear narrative.  This is regrettable because the story shows occasional flashes of insight into the workings of the underworld with an unflinching honesty that Martin Scorsese might appreciate.  And because its plot is so disjointed, the movie’s 60-minute running time has to be padded with burlesque-style comedy routines and a laughable dance number.  Almost the entire movie is shot on a flimsy soundstage with sparse decoration that can’t conceal the artificial environment where the action is actually taking place. 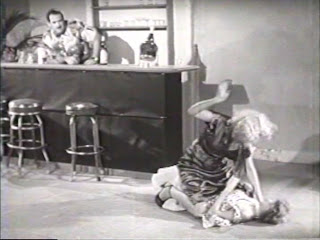 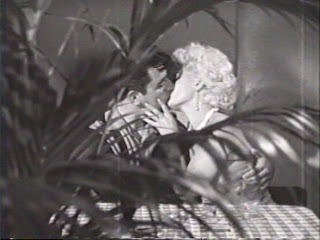 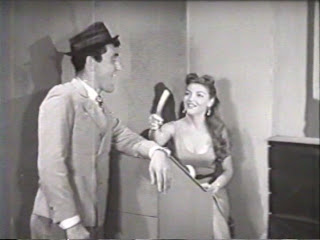 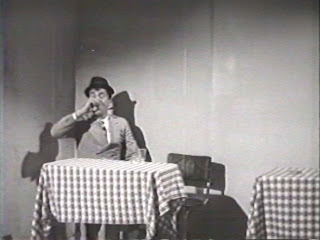 However, when its last scene appears on screen, Dance Hall Racket seems to transform into a different film altogether, if only for a couple of minutes.  At the story’s end, Scalli’s henchman Vincent (Bruce) double-crosses his boss and makes off with the smuggled diamonds and the racket’s ringleader as hostage.  By this time, the police have traced the smuggling to Scalli’s business and chase after Vincent, who shoots at them before dying from return fire. 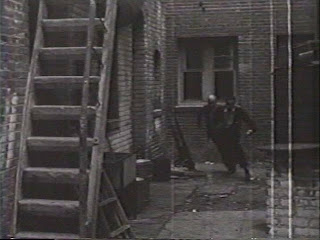 What makes the scene feel like a moment from a completely different — and better — film is its exterior setting.  Presumably shot in an alleyway behind the studio, the location exudes a grittiness and naturalism in marked contrast to the threadbare artifice of the interiors.  Also, this climactic shoot-out is wordless and thus free of the stilted acting that plagues so many of the movie’s dialogue scenes.  The location setting lends the gun battle an air of realism and credibility so utterly missing from the rest of this otherwise trashy film. 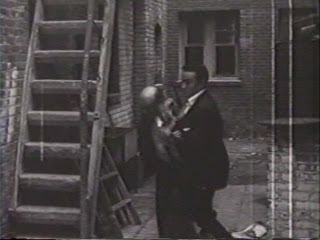 When I first saw Dance Hall Racket, which I watched primarily because of Bruce’s involvement, the slipshod quality of the movie lulled me into a languid stupor.  But the neo-realistic atmosphere of the climax snapped me awake again.  I started wondering how more location shooting might have enhanced the picture.  If Dance Hall Racket had been able to film in an actual bar or taxi-dance hall, the movie might have avoided the substandard production values that diminish its already fragile integrity.  I’m guessing that the film’s budget was so submicroscopic that lugging the camera from one location to another was never even a gleam in the director’s eye.  Granted, more location work wouldn’t have rescued the movie — the script is too loose and episodic to cohere into a solid story, even if it had decent actors — but the stark and truthful atmosphere that elevates the last scene might have elevated the entire film. 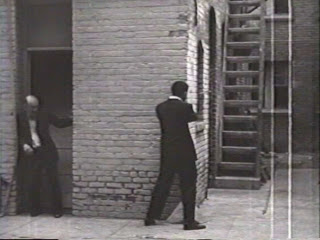 Thinking about this also drove home to me that much of the success of the 1960s New Waves was utterly dependent on the newly available tools that permitted location shooting, particularly lightweight cameras and sound equipment and “faster” (more light-sensitive) film stocks, tools not available to earlier generations of movie-makers.  Much of the freshness of these New Wave films came from the documentary-like flavor of some titles — Shadows (1959), Breathless (À bout de souffle, 1960), Accattone (1961), even the costume drama Jules & Jim (1962), and others — which liberated the camera from the studio and endowed the stories with an immediacy and urgency largely missing from the Hollywood product of the era.  If New Wave filmmakers were as bound to the studio as Dance Hall Racket’s previous scenes, there might not have been a New Wave at all. 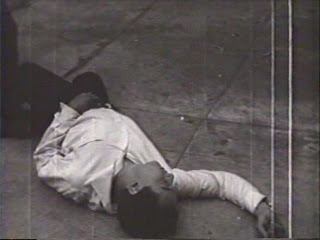 The sudden eruption of invigorating cinéma-vérité in the climactic scene of an otherwise stagebound and stodgy programmer throws the rest of the risible movie into relief.  The abrupt appearance of a dilapidated back-alley location evokes the idea of an alternate version of Dance Hall Racket, one whose low budget might have been an asset instead of a liability, one whose use of seedy naturalistic settings might lend the cynical story a greater realism, and one whose script would better foretell the hard-hitting and insightful views of human frailty that screenwriter and actor Lenny Bruce would later realize more fully in his pioneering stand-up comedy.  Despite its copious flaws, Dance Hall Racket marks a moment in American film history where the promise of location filmmaking for low-budget productions stood in obvious and eye-opening contrast to the limitations of the soundstage.  In doing this, Dance Hall Racket even today provokes the viewer to imagine the more compelling, studio-emancipated movie that might have been.
Trailer for ‘Dance Hall Racket’
Posted by Rob in L.A. at 10:49 AM