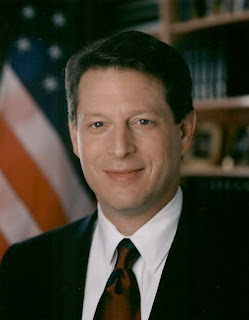 Here is something else that I posted on LiberalsOnly.com. It’s the only fiction that I’ve written in quite some time:


WASHINGTON — Yesterday, Al Gore became the first U.S. president to be removed from the White House via impeachment. By a vote of 67-33, a two-thirds majority of senators in the Republican-led chamber agreed to force the 43rd president from office. The devastating terrorist attacks of last September 11, and the Gore administration’s inability to prevent them, was cited as the main reason.

Last month, the House of Representatives pushed for articles of impeachment against President Gore after a bipartisan committee headed by former vice president Dan Quayle, a Republican, and former Georgia governor Zell Miller, a Democrat, concluded that Mr. Gore “demonstrated gross negligence and egregious incompetence for allowing these monstrous attacks to happen.”

Last week, a contingent of House Republicans presented its arguments for impeachment on the Senate floor under the watchful eye of U.S. Supreme Court Chief Justice William H. Rehnquist. Led by Rep. Bob Barr (R-Ga.), the Republican contingent made impassioned arguments in favor of Mr. Gore’s ouster against a backdrop of photographs of 9/11 victims and the smoldering World Trade Center.

The recent tide of public opinion against Mr. Gore is in marked contrast to the mood of the country immediately after the attacks. In those tense days, the President made several televised speeches about the need for the country to “be brave” and bring al-Qaeda, the Afghanistan-based terrorist organization responsible for hatching the attacks, to justice. Poll after poll of U.S. citizens showed public approval of Mr. Gore’s handling of events in near-astronomical territory.

However, a growing chorus of critical voices — including such high-profile figures as Rush Limbaugh, The Wall Street Journal, and various personalities from Fox News — began to blame Gore for the attacks. “If you want a good reason why Al Gore has no business being president,” Mr. Limbaugh famously said last year on his nationally syndicated radio show, “I can give you 3,000 of them who died on 9/11.”

“Gore won the election in 2000 with barely 51 percent of the vote,” Mr. Limbaugh continued. “There’s no way you could call that a mandate.” Mr. Limbaugh echoed popular conservative sentiment that Mr. Gore’s narrow victory in the 2000 presidential election was undeserved.

These mounting critical voices influenced Congress to initiate the Quayle-Miller committee, which led to the impeachment.

While the President and his closest advisors have remained mum about the impeachment in recent days, several White House aides were stunned over the results of the lopsided vote.

“There’s absolutely no reason for the vote to have turned out this way,” said a low-ranking aide who spoke on condition of anonymity. “The President did everything he could to prevent any terrorist attacks. He formed that task force on terrorism immediately after getting that intelligence memo titled ‘Bin Laden Determined to Attack Inside the U.S.’ No one could have foreseen al-Qaeda using airplanes as missiles; that was totally outside the box.”

On the floor of the Senate last week, Rep. Barr argued that Mr. Gore should have anticipated such a plot.

The White House aide went on to list the Gore administration’s accomplishments since September 11, including its military invasion of Afghanistan shortly afterwards. “What about the President’s sky-high standing after the attacks? He put a human face on America’s suffering and on our determination to get the people who did this. He successfully ousted the Taliban from the government in Afghanistan in October and captured Osama bin Laden a month after that. Doesn’t that count for anything?”

Current Vice President Joseph I. Lieberman is set to take the oath of office at noon tomorrow. In the name of “national unity,” some Republican lawmakers are asking Mr. Lieberman to name a GOP vice president once in office. Mr. Lieberman has remained non-committal on the issue.

At his press conference, Sen. Lott added his voice for the country to move on. “If America learned anything from 9/11, it’s that you can’t be too lax on national security. Here’s one thing you can take to the bank: If there had been a Republican in the White House on 9/11,” Sen. Lott continued, “those attacks never would have happened.”
Posted by Rob in L.A. at 5:10 PM