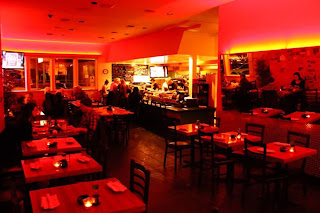 Last night, I walked over to my local Hungarian restaurant for dinner. And, of course, they closed early that night and sent me packing. So, instead, I moseyed on over to Sushi Dan, which claims to be “rockin’ sushi,” in a mini-mall near the corner of Ventura and Vineland in Studio City.

Sushi Dan inhabits the suite that used to house Sushi on Tap, which had to have been one of the strangest restaurants I’d ever set foot inside. At Sushi on Tap, while you were eating your raw fish and noodles, the waiters and the sushi chefs would leap out onto the restaurant floor and go into some song-and-dance numbers. The now-defunct L.A. New Times rated Sushi on Tap “Best Sushi Restaurant with a Wacky Floor Show.” And so it was. However, the difficulty of making the sushi came to preoccupy the chefs’ time, and the floor show soon degenerated into a few local hoofers doing some unshowy improvised moves. Next thing I knew, Sushi on Tap had danced away.

Today, Sushi Dan is after a younger, hipper crowd. Rock music is always blaring from the sound system, and the über-moody lighting looks like it’s designed by Helen Keller. Settling into my table, it was hard to keep my mind on the subject of food because the restaurant boasted two exceptionally attractive waitresses. One looked lovely in a stately statuesque way with fine chiseled features; the other had a very appealing elfen air about her. Entranced by these two dazzling beauties at the same time, I could easily understand why some societies condoned polygamy, and it was all I could do to keep my stolen glances at them as furtive as possible.

Another amusing occurrance was that everyone whom the waitresses seated at the small table next to mine kept asking to move. First, a couple on a date sat there for a few minutes, then asked to be moved to the sushi bar. Next, a couple of guys were seated there, and it wasn't long before they asked to be moved, too. Then, two women were seated there, and the next thing I knew... Well, you get the idea. I didn't see why sitting next to me was so objectionable. Maybe I need to shower more often.

Anyway, one of the specials that night was a lobster Langoustine in dynamite sauce over California roll. It was relatively expensive but too intriguing to pass up. The taste was pleasant enough, but I don’t think that it really succeeded as a sushi dish.

Sushi Dan is becoming known for their loud flavors, marked by their specializing in oil-rich tempura rolls with a splattering of sweet sauce. The result is usually a heavy taste that goes against the more subtle flavors that are sushi’s best-loved trait.

The lobster and dynamite sauce had a tongue-pleasing tang, but I don't think that they went especially well with the California roll, whose flavors were smothered by the heaviness of the lobster. Also, it was all I could do to keep the generously sized cuts of sushi and lobster in my barely closed mouth, so the logistics of chewing my food distracted me from fully enjoying the flavor of my meal. And I kept thinking that their lobster Langoustine would probably taste — and be eaten — better between two slices of bread as a lobster roll.

Since the price of the roll didn’t leave me completely destitute yet, I also ordered another Sushi Dan special: a blue crab handroll. Again, the taste was agreeable, but the flavor of the crab was so heavy that there wasn’t much room for the rice and nori to work as complements. Sushi Nozawa also serves a crab-salad handroll, but its flavor is much lighter, so the finely balanced combination of crab, rice, and seaweed works well together as a whole dish. But that’s another restaurant.

And Sushi Dan capped off my dining experience by forgetting to charge me for my glass of wine. You just can't beat free food.

While they might not serve the best sushi I've ever eaten, Sushi Dan does provide some intriguingly off-beat offerings and uncommon flavors. Head chef Danny Kim is a stand-up guy, and his wife Michelle makes a charming hostess. Not being a sushi perfectionist, I’ll probably go back again soon to sample some more of the dishes and to soak up the atmosphere. Oh, yes, and to scope out the waitresses.
Posted by Rob in L.A. at 3:47 PM