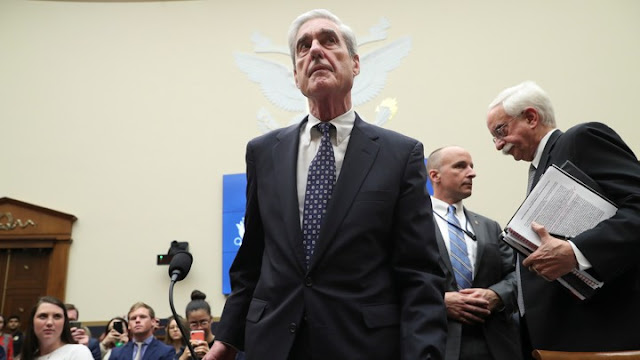 Trump ... is constantly working to undermine public trust in mainstream news outlets. But he needn’t worry too much. If nothing else, the coverage of the Mueller hearing illustrates the extent to which much of the mainstream press has internalized Trump’s own reality-show standards for what counts as a significant political development. All the world is trashy television, and the president and his opposition are merely producers. After three seasons, Russiagate just got old, and the critics got bored with it.

If she couldn’t make it onto the $20 bill this year, at least she made it onto the silver screen.
Posted by Rob in L.A. at 10:43 PM No comments:

Greg Sargent: ‘Trump’s Hijacking of the Fourth of July Just Got a Lot Uglier’

The historians tell us that this is what authoritarian nationalists do.  As Harvard’s Jill Lepore puts it, they replace history with tried-and-true fictions — false tales of national decline at the hands of invented threats, melded to fictitious stories of renewed national greatness, engineered by the leader himself, who is both author of the fiction and its mythic hero.

This is what we will be seeing in one form or another on the Fourth of July, no matter what Trump says in his planned Independence Day speech from the Lincoln Memorial. The very act of taking over the proceedings in the manner he has cooked up itself accomplishes this feat.