As the aftermath of the election of Donald Trump is being sorted out, a common theme keeps cropping up from all sides: “Democrats failed to understand white, working-class, fly-over America.”

Trump supporters are saying this. Progressive pundits are saying this. Talking heads across all forms of the media are saying this. Even some Democratic leaders are saying this. It doesn’t matter how many people say it, it is complete bullshit. It is an intellectual/linguistic sleight of hand meant to throw attention away from the real problem. The real problem isn’t east coast elites who don’t understand or care about rural America. The real problem is rural America doesn’t understand the causes of their own situations and fears and they have shown no interest in finding out. They don’t want to know why they feel the way they do or why they are struggling because they don’t want to admit it is in large part because of choices they’ve made and horrible things they’ve allowed themselves to believe.

Read the entire article.
Posted by Rob in L.A. at 2:07 PM No comments:

I’m hesitant about posting anything political on Thanksgiving. After all, this is a day when I and many others believe that we Americans should take a break from our fractious political disputes and focus on what unites us as a nation.

But I am one of those liberals who has been utterly thunderstruck by the unexpected election of Donald Trump.  Never having held elected office or military command before, and infusing his speeches with hateful vulgarities, Trump, I thought, was obviously unfit and unsuited to the highest office in the country, if not the world.  So, I’m absolutely gobsmacked that so many voters — enough to win Trump the Electoral College, albeit not the popular vote — didn’t agree with me about the obviousness of his unsuitability for the office.  I’m sure that many conservatives will say that I am blinded to Trump’s worthiness for the office by my blinkered liberalism that’s insulated from the virtues of small-town America (evidenced by my use of the foreign slang term “gobsmacked”), but that is a discussion for another day.

However, I was listening to the radio today, which played Trump’s Thanksgiving Day address to the people he will soon be governing.  In it, Trump said that he hopes to bring “real prosperity” to the American people.  The underlying message of this statement is that the last eight years under President Barack Obama were not particularly prosperous.

Hearing Trump say this, I was reminded of the economic calamity that happened on President George W. Bush’s watch, the worst since the Great Depression 80 years ago.  President Obama was able to bring this country out of that fiscal hole, but the ensuing economic prosperity hasn’t been felt by everyone.  This sense of people being left out of the economic recovery was obviously what Trump was implying by his remarks.  But the main reason for the country’s perceived lack of shared fortune, I submit, is because the congressional Republicans fought Obama’s plans for economic revival every step of the way.

Obama had several plans for refurbishing the country’s infrastructure, plans which would have put many more Americans back to work and would have thereby boosted the economy.  But the Republicans stymied or blocked most of those plans on the argument that the deficit needed to be reversed before any such plans could be passed.  This argument brought back memories of the budget surplus left to George W. Bush by Bill Clinton, a surplus that Bush quickly squandered via his tax cuts, the majority of which benefited wealthier Americans.  The deficit was largely created by the Republicans, and I always thought that they had great chutzpah for citing it as the reason for blocking Obama’s plans for economic recovery.

Congressional Republicans during the Obama administration knew that if the economy improved too well under the first African American president, he would get the credit, which would redound to the rival Democratic Party.  So, Republicans — putting political party before country — did everything they could to hinder or thwart Obama’s economic plans.  And as a consequence, the economy — despite a record number of months of continued job growth — improved only haltingly.  The Republicans’ strategy appears to have worked: rather than remembering that Democratic measures dug the American economy out of its Republican-created hole, a decisive number of voters only blamed Obama for not improving the economy quickly enough and elected a member of the hole-creating rival party to succeed him.

Once Trump is in office, expect congressional Republicans to become born-again deficit spenders to improve the economy with infrastructure projects of their own, along with extra tax cuts.  If these plans succeed, Trump will get the credit for boosting the economy — boosting, in turn, the Republican Party’s fortunes.  Another result will be that the deficit worsens.  Consequently, when another Democrat inevitably gets elected sometime down the road, expect the congressional Republicans to once again use the deep deficit as a way to block any Democratic plans to improve the economy, and once again, expect the resulting underperformance by the economy to work to the Republicans’ political advantage.

‘Trump’s Election and the Power of Fear’

From Media Matters for America:

It is impossible to overstate the significance of this year’s election. The consequences for America and the world are profound, and we are only beginning to come to grips with what might come next. As we do so, it is important to learn and remember the key lessons from this terrible election campaign.
Unfortunately, liberals and media types are already engaging in the worst kind of post-election recriminations. Suddenly, we are being treated to 20/20 hindsight about Hillary Clinton’s supposedly “flawed candidacy,” even though the swing of only a few thousand votes in a couple of key states would have resulted in her winning the presidency.
Had she won the electoral vote, of course, there would surely have been no stories about how brilliantly Clinton navigated the treacherous political terrain of 2016, but rather more snark about how she should have done better

Read the entire article.
Posted by Rob in L.A. at 2:17 PM No comments:

Kurt Eichenwald: ‘The Myths Democrats Swallowed That Cost Them the Presidential Election’ 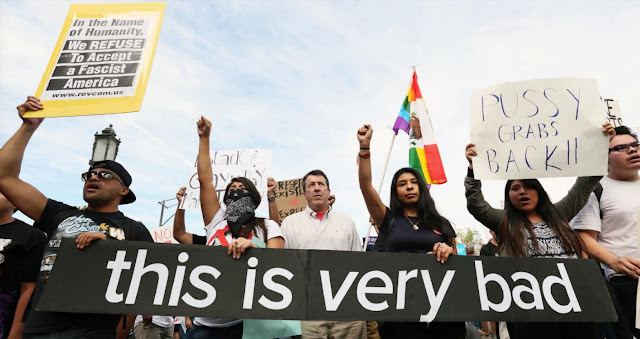 It is impossible to say what would have happened under a fictional scenario, but [Bernie] Sanders supporters often dangle polls from early summer showing he would have performed better than [Hillary] Clinton against Trump. They ignored the fact that Sanders had not yet faced a real campaign against him.  ...

So what would have happened when Sanders hit a real opponent, someone who did not care about alienating the young college voters in his base? I have seen the opposition book assembled by Republicans for Sanders, and it was brutal. The Republicans would have torn him apart. And while Sanders supporters might delude themselves into believing that they could have defended him against all of this, there is a name for politicians who play defense all the time: losers.

Here are a few tastes of what was in store for Sanders, straight out of the Republican playbook: He thinks rape is A-OK. In 1972, when he was 31, Sanders wrote a fictitious essay in which he described a woman enjoying being raped by three men. Yes, there is an explanation for it — a long, complicated one, just like the one that would make clear why the Clinton emails story was nonsense. And we all know how well that worked out.

Michael Tomasky: ‘No, Bernie Sanders Would Not Have Won’ 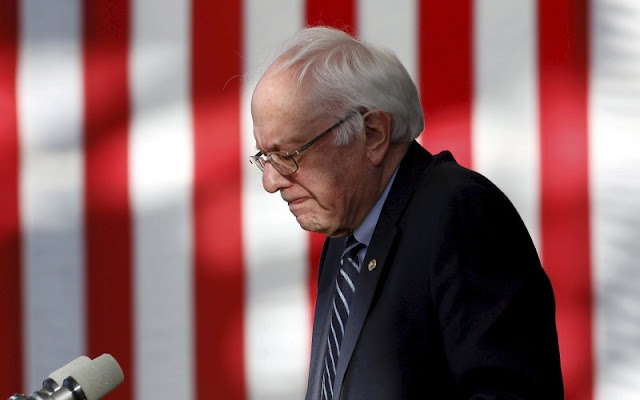 From The Daily Beast:

Bernie Sanders gave his first post-election interview Thursday, to CNN’s Wolf Blitzer, and when Blitzer asked him if he’d have won, here’s what he had to say: “I don’t think it makes a whole lot of sense to do Monday morning quarterbacking right now. The election is over. Donald Trump won. Between you and me, Wolf, I would have loved to have had the opportunity to run against him, but that did not end up being the case.”
Many of his backers are being less diplomatic. And one can’t help suspect that deep down Bernie thinks he would have won, because well, who in his position wouldn’t? So one last time, into this particular abyss—not just to reargue the past, but because the lessons learned from all this have application to the futures of the Democratic Party and the progressive movement. 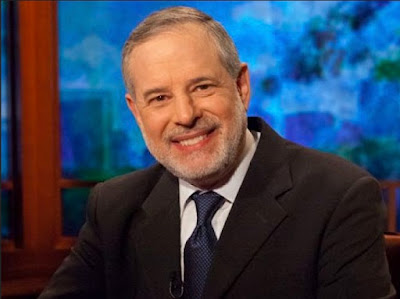 America died on Nov. 8, 2016, not with a bang or a whimper, but at its own hand via electoral suicide. We the people chose a man who has shredded our values, our morals, our compassion, our tolerance, our decency, our sense of common purpose, our very identity — all the things that, however tenuously, made a nation out of a country.
Whatever place we now live in is not the same place it was on Nov. 7. No matter how the rest of the world looked at us on Nov. 7, they will now look at us differently. We are likely to be a pariah country. And we are lost for it.

Read the entire article.
Posted by Rob in L.A. at 4:20 PM No comments: